Shower The Bride….But First Have An Anxiety Attack

Shower The Bride….But First Have An Anxiety Attack

I know, I know. I haven’t been around much lately. I’m super sorry about that but this is wedding season and that’s always a busy time for me (with makeup and such). It doesn’t help that a lot of my close friends chose this summer to get married…. Including my brother. So between showers, work, weddings, and you know, my family at home, it’s been pretty damn busy to say the least. So I’m going to slowly try to catch you up on what I’ve been up to. I’ll start by going over the first wedding shower I’ve ever thrown. So take a look at what the inspiration was, your costs and how this one turned out. 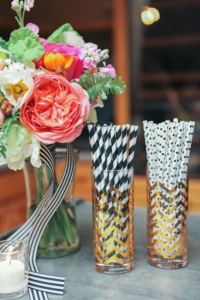 First of all, this shit is expensive. I had no idea you guys. I thought it would be easy and breezy and didn’t really think much of it. That was until we started planning. Here is a little rundown on what you’ll be dealing with if you plan one of these for a friend. 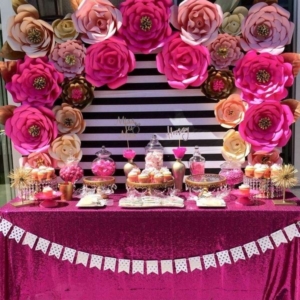 Venue- We chose to throw the shower at Murphy’s An Irish Legacy Restaurant/Pub.

Food- We paid our venue to take care of that for us.

Drinks- The venue took care of that for us as well.

Games- This takes more time than anything, and thank the lord that the other fine lady throwing this with me was in it to win it. There was no task she wasn’t willing to take on.

Favors- Again, I happened to throw this with a Pinterest wizard so she made bath bombs for everyone….. And they were amazing.

Cake- We were totally prepared to order a cake, until the first place we went to told us the starting price for a plain, undecorated cake starts at around 60 dollars. Oh how we laughed at that. So Ashley (my shower angel), said “Fuck it. I’ll make it. It can’t be that hard”. And she did it amazingly well. 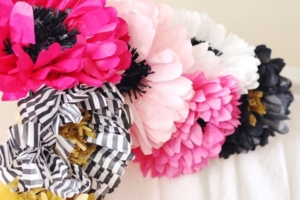 The Shower Run Through

You know the phrase “It takes a village to raise a child”? Well, no. It takes a village to throw a shower. No joke. Thanks to Margo Henuset and Sean and Barb Murphy, the location, food and drinks were pretty much planned. We chose spinach dip, veggie trays, vegetable pizza and punch to serve. Having it in a pub styled restaurant we figured if you wanted alcohol of your choice, you could order it…..and ooooh we did. Plus I figured if anyone was still hungry I could order a platter off the menu and be safe. They did an amazing job on the food and everyone enjoyed it. Plus, I didn’t have to make it. Winning. Also, we had our amazing Kate Spade striped cake courtesy of Ashley. To add a little more sweet to the party, we also had mini cake doughnuts with paper diamonds on top so they looked like little, delicious diamond rings. Soooo cute. 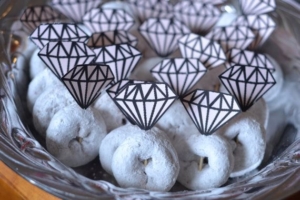 When it came to decorating, I had to send Ashley my ideas and put my trust in her. My morning of the shower consisted of getting up at 7 am to go do wedding makeup first, then running to pick up the flowers and finally stopping to help decorate. Then I had to go get my raggedy ass ready to host people. So a huge thank you to everyone that helped. We did a large striped table cloth on the head table with huge gold X and O balloons behind it. Kate Spade paper flowers were hung on the walls, balloons filled with gold glitter were hung and black tablecloths were placed on all of the other tables with a different shade of peach or pink runner with a flower on top. Add in our striped and polka dotted straws, gold centerpiece for the head table, gift table, and decorated guest book table with the favors, and were almost there. 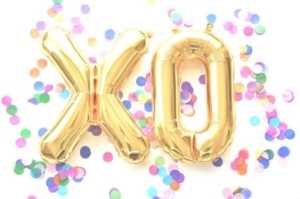 I had never done this before, so imagine the anxiety attack that I had two nights before when I realized that we would have to do something to pass the time. Anything! So we set out to find some fun games that the bride wouldn’t hate. Yes a lot of people groaned because it’s like shower homework, but it’s fun and great memories for the bride when she reads your answers later. We chose things like “how well do you know the bride”, “finish the vows”, and “leave the bride some advice”. Trust me, after a couple of drinks it becomes a lot more fun… and x-rated. If you won the game or had the most points, your prize was a Hawaiian leis. That way you could tell people that you “Got leid at Nichole’s shower”. Always funny when the brides mom wins lol. 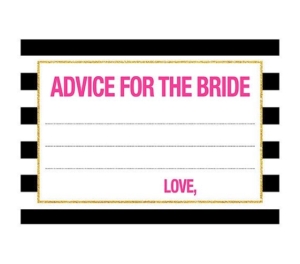 I learned a couple of things through all of this that I wanted to share with all of you in case you ever decide to throw a shower for a friend.

1. Don’t worry about everything being perfect. I’m a perfectionist so I’m very anxiety driven. At the end of the day the bride would have been happy with sitting in the grass somewhere. It’s the thought people, the thought.

2. The guestbook. Don’t forget the damn guestbook. I know it may not seem important, but this will tell her who to give thank you’s to after the fact. Also, it lets her know who was there to celebrate with her.

3. You can’t do it all yourself. I was lucky enough to have amazing, hard working and go with the flow people helping. There was no fighting. There was no power struggle. Ashley was just as much spearheading everything as I was. I listened to her ideas and she listened to mine. We worked pretty harmoniously together.

4. Choose a venue that you trust. As soon as we figured out we were having the shower at Murphy’s, I knew that Sean, Barb and Margo would take care of us very well. They were very helpful and everything went off smoothly without a hitch. They were very relaxed and a dream to work with.

5. Focus on the bride. If the bride likes spinach dip, you serve spinach dip. If there is a family feud brewing because of the wedding, pretend like it’s not happening. The day of the shower is about her and her upcoming wedding to the groom. That’s it. That’s the whole damn point of the thing. If something is making her uncomfortable, change it. You’re there to welcome guests and make sure that everyone is enjoying their time visiting the bride. You can admire the beautiful gold balloons once everyone leaves.

6. Take pictures. We literally took like, four pictures of the whole set up. Even better, we didn’t get one of the head table fully decorated, just partially. So I will be including a couple photos from the actual event as well as some that were our inspiration. 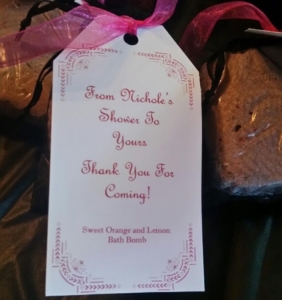 Thank you to everyone who came to celebrate the upcoming wedding (well it’s over now but I plan on taking that on in a different post) of Darren and Nichole. We all enjoyed seeing you there and getting to visit and have some laughs. Also, thank you to Ashley for doing everything so amazingly well and with a smile. If we ever need to build a rocket ship to get to the moon I’m going to let you Pinterest it for three days and then I’ll be climbing in with you. There’s literally nothing you can’t do when you’re hell bent on doing it, case in point, paper flowers. Thank you to Plaza Petals for the beautiful flowers and work that went into the corsages. I showed up a week before and you had about thirty weddings and grads on the go but still fit us in, and with beautiful results. Lastly, thank you to Murphy’s for allowing us to hold it at your restaurant and for taking care of the food details as well as Margo for her time and patience putting it all together for us. I haven’t had to work with me before, but Margo I bet it was a real walk in the park lol. Thank you.

Nichole, we hope that you enjoyed your wedding shower. Now if I could have a small favor, it would be greatly appreciated. I don’t want to push anything on you, but if you ever happen to get married again, it would probably be the best shower ever now that I know what I’m doing lol.